A negative deposit rate at the central bank (currently down 0.4%) has Commerzbank examining whether it is worthwhile to store €2 billion in a cash vault rather than in the European Central Bank (ECB).

With this step, Commerzbank will be the first major bank in Europe that withdraws because of the negative interest rate.

The official decision has not yet been revealed. Currently Germany’s second largest bank is not hoarding billions in cash in their vaults, a spokesperson for Commerzbank told Handelsblatt.

Since the summer of 2014, the ECB requires a penalty interest of commercial banks that store funds. Since March, the interest rate now lies below 0.4%. This indicates that the central bankers are pushing commercial banks to lend more to stimulate the economy.

A decision by Commerzbank to hoard funds in their vaults would effectively undermine the stated objective of the central bank. As well, this may have significant political effects. The German government holds almost 16% of funds in Commerzbank, based in Frankfurt.

The German tax authorities are aware of Commerzbank’s plan and have no objections, according to insiders. Due to legality, the ECB also is not able to give instructions about what to do with excess liquidity. The ECB may complicate the shift of funds, by releasing it slowly, however.

Is cash storage worth it for banks?

Storing two billion euros in 200-euro bills would require 10 million bills, weighing 1.1 grams per bill. The result is a total weight of 11 tons. Commerzbank must then include the costs of transport, storage and insurance of cash in deciding the financial benefits of vault storage.

Some banks have already decided it’s simply not worth it—at least for now. The Bavarian Association of Savings Bank, for example, calculated expenditures required for cash storage. Ultimately, the bank president Georg Fahrenschon revealed in March that the safe storage is not worth the negative deposit rates of 0.4%.

Meanwhile, banks have increasing problems to meet the customer demand for safe deposit boxes. Especially in cities, demand is booming. Customers should expect long waits for storage lockers. Lockers quantities are locked with the rules of the bank, so it is difficult to increase supply.

Major insurers also get increasingly more requests to insure safes and lockers, says the Munich subsidiary Ergo. In response to low interest rates, the world’s largest insurer has already laid gold and tens of millions of euro bills in the vault.

Many large investors and companies already pay interest if they store large sums of money in their banks overnight. Banks don’t transfer the negative interest rates to private customers up to now, but instead bear the costs themselves.

When a customer pays large sums to his account at Deutsche Bank, for example, they may think bank CEO John Cryan says:

“Oh no! Not even more money, which will cause losses. No one wants money, I cannot give!”

This is because demand for loans from German companies is lower than offers from the banks. 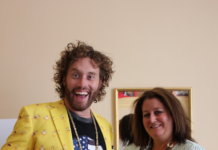