Instead of a pen, Nick Willems is burning with heat and fire. ‘Painting and drawing don’t keep me engaged. Everyone is doing that.’ Currently, the Dutch artist exhibits his work in an art gallery in Den Haag that focuses on contemporary art.

Nick Willems is drawing with fire and heat

It’s one of the few sunny, but still breezy days in Groningen. Artist Nick Willems enjoys a cup of tea while an old couple enters the brasserie.

‘Glued together, laughing, and teasing.’ He describes them as lovers who have just met. ‘But they were married their whole life and still seemed to be excited about each other like on their first days! You could see they were old, but their energy was radiating, and inspiring to me.’ Nick asked for their names, their story and permission to capture his inspiration before he started burning.

Apparently, being patient doesn’t get easier with age. The old couple couldn’t wait until Nick finished his piece and thus stayed the whole time in touch. After two months of work, he finally came to their nursing home to visit and present his finished creation. Only a few days later the husband has passed away.

Nick Willems draws with fire and heat. But instead of paper, he rather uses wood. ‘Painting and drawing don’t keep me engaged. Everyone is doing that.’ The Dutch artist from Groningen in The Netherlands finished his education in summer 2016 and is burning ever since.

His manual skills are rooted in traditional painting. He studied in one of the best art academies in Holland but translated what he learned in something unique that hasn’t been done before.

Nick Willems needs the following: Wood, coal, a soldering iron, a burner and a heater. First, he sketches his art with coal. Then he starts burning with very little heat and carefully increases the temperature and pressure. The longer he is burning, the darker it gets.

‘It’s just like painting on paper, but you cannot erase your mistakes.’ Nick says, drawing with heat is a very long process and requires tireless patience and motivation to stay focused.

All his pieces took several months to complete. Though Nick is working on several projects simultaneously. In this way he never gets tired. 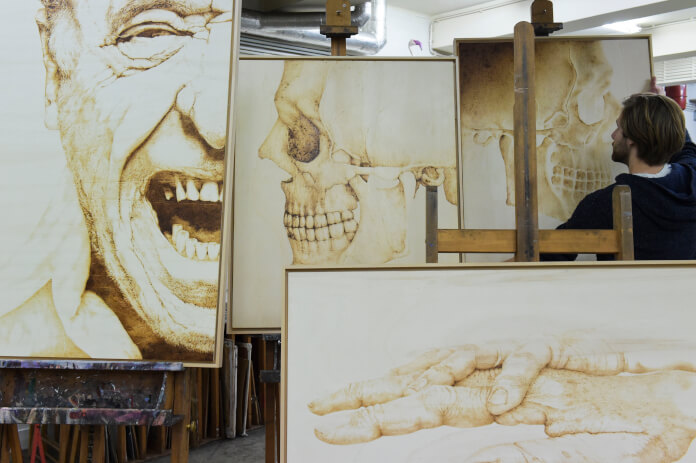 No one taught him how to do draw with heat and fire. ‘Working with wood can make you very nervous,’ Nick explains, ‘because once you burnt a little too much, the whole piece is worthless.’ And though Nick ‘appreciates a little imperfection’ in his work, his creations are far from amateurish.

The ‘De Twee Pauwen Art Gallery‘ in Den Haag presents promising contemporary figurative art and emphasises on young artists who create their own visionary world. The gallery spotted Nick’s talent when he exhibited his first pieces along with his graduation. Now, he is one of the gallery’s residents and sells his work from there ever since.

Drawing with fire is not something you see every day – it’s fresh and new. From far you wouldn’t believe it to be wood, nor that his art is painted with heat and fire. Coming a little closer, Nick’s art is a lot more engaging than just a normal painting.

The solid wood creates, especially in combination with the sensual precision of Nick’s burning, a substantial presence. 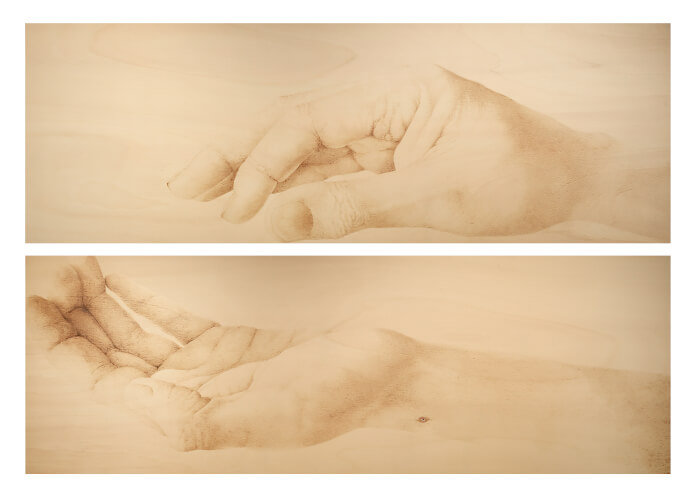 This picture was inspired by Nick’s own father. ‘You always give energy, and you always receive. Even when I am not aware of the exchange, I still try to be conscious of what I’m doing. Especially, about my impact on other people.’ 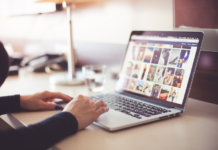 10 remote jobs where you don’t have to be blogging