With the recent establishment of “Godspots”—making Berlin and Brandenburg churches into WiFi hotspots—we got our first inkling of the churches trying to connect to the younger generation, and more deeply connect religion with modern technology. 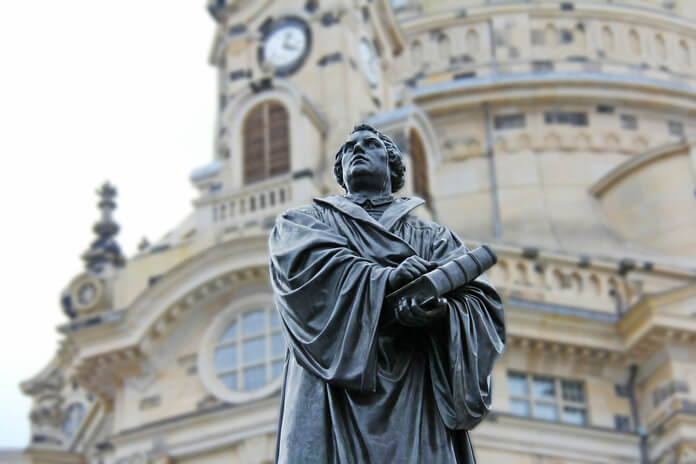 Now, the German state of Thuringia has created a “Martin Luther” app.

A little refresher of Mr. Luther

Martin Luther was a German theologian whose writings inspired the Protestant Reformation. He was born November 10, 1483. At the age of 22, he joined a monastic order, becoming an Augustinian friar. He was ordained in 1507, and began teaching at the University of Wittenberg. In the year 1512, he was made a doctor of Theology.

In the year 1510, he visited Rome and was appalled with the corruption he discovered there. He became increasingly upset about the clergy selling “indulgences”—the promised remission from punishments for sin. On October 31, 1517, he published his ’95 Theses”, condemning the papal abuses and sale of indulgences.

Luther believed that the Christians were saved through faith, not their own efforts. These beliefs were a catalyst in turning him against the major teachings of the Catholic Church. Those who identified with Luther ideas were called Lutherans, even though Luther himself insisted that Christian or Evangelical was the only acceptable term. He began writing a series of pamphlets developing his ideas, which spread quickly throughout Europe thanks to the printing press.

In 1521, Pope Leo X excommunicated him. Emperor Charles V declared him an outlaw and heretic. In 1522, he returned to Wittenberg and married a former nun, with whom they had six children.

In 1534, Luther published a complete transition of the bible into German. He held a deep belief that people should be able to read in their own language. His influence spread throughout northern and eastern Europe.

The Martin Luther app launched by the Thuringia was created to celebrate the 500th anniversary of the Protestant Reformation. The Lutherweg app (Luther way) offers visitors the chance to follow in the footsteps of one of the significant members of the reformation itself.

The inspiration for the app comes from the fact most of us already rely on our smart phones for travel information. The app itself covers an area of 1000 kilometers. It features information about more than 20 “Luther towns”. This also includes 180 churches, and 400 other tourist destinations.

With the app, visitors can “rediscover Martin Luther’s homeland and gain new insights into the legacy of the reformation”. The Luther Trail is designed to give the visitor many thought-provoking encounters with the reformer. “Walk, look, pray, find inner peace”

This is how traveling Iran suddenly became popular