Everyone knows the movie “Hitch”, where Playboy Will Smith gives dating advice to Kevin James, the chubby accountant who doesn’t get the girl he wants. Looking at the confidence and personal attributes of the dating coach, it makes you want to be like him — and that’s why many people would pay a fortune to get his insights.

The modern dating coach is using the same principle. And you can become one of them yourself, at least if you put in the right amount of work and effort.

Why is dating advice needed?

First, let’s put their believes into context. There are still people who are following the mainstream narratives of Hollywood. The guy is supposed to have a sportscar, to be jacked and is at least 6 foot 2. Let’s not even get started on the pressure that is lying on girls. Unfortunate body proportions or social weirdness makes everyone lose in the world of dating.

Men and women try to live up to the standards of society’s projected images. Well, until they reach the success the craved so long, and find themselves as miserable as before. You get the wealth, the recognition and the high-paid job. But still no success with the other gender.

Modern dating coaches see the problem in the inner confidence and the believesystem of the individual. The assumption of not being good enough makes us all act against our own will and sabotage our lives. So instead of learning what to say, they teach how to be, and how to feel. It’s the concept of becoming attractive, rather than trying to seduce.

Every coach has a different approach, and every company out there varying teaching techniques.

How the modern dating coach gets his clients

Like Hitch, the modern dating coach needs to demonstrate his expertise and talent by example. The PUA-movement of so called “Pick-Up Artists” brought the whole idea of teaching dating advice to another level.

Self proclaimed experts in dating and relationships simply get in front of a camera and record themselves talking about their experiences. Sometimes they even show hidden camera footage of themselves talking to the opposite gender.

Social media, chat forums, and other platforms help them to build their brand. They also apply marketing strategies to their videos. From provokative statements to targeting special segments – they know how to convince a audience. Videos get shared and their posts go viral.

This is how they make money

Popular coaches are followed by thousands of people. As Youtubers, also they are paid for every klick on their videos. Of course generating clicks is not as easy as it sounds. To be shared and talked about your content needs to be very good, and hold up against the intense competition.

But the money from Youtube is the least amount of income you can expect. Dating advice nowadays goes way beyond passing over theoretical concepts.

Really successful dating coaches travel the world and sell their knowledge in person. Their students are more than willing to pay up to 300 Euros for one spot in a seminar that lasts around six to eight hours. Normally these kinds of events have around 100 people.

On top that they sell personalised coaching to very eager students who want to improve. To spend one day with a popular coach you can expect to pay around 1000 Euros. In this case, you share his presence with three or four other participants. 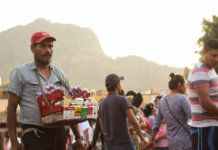 The Carnival of Tepoztlán is a cultural highlight in Mexico