The Ulm Minster is an iconic church. Construction began in 1377, though it was not finished until 1890 – more than half a millennium later. It’s the world’s fourth tallest structure completed before 1900 at a staggering height of 161.5 meters.

It was even the tallest building in the world for a short period of time. Still today, the church steeple is the tallest of any other Christian church, including the infamous St. Peter’s Basilica in Vatican City. 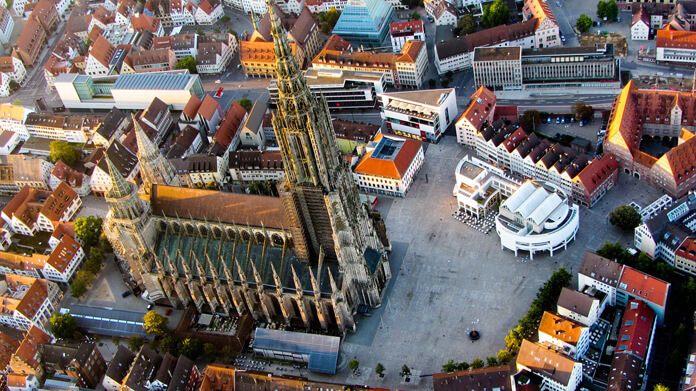 And guess what? People are peeing all over it. So much so that the church is being slowly destroyed.

No we’re not joking.

The Ulm Minster (Ulmer Münster in German) is the central of the city of Ulm located in the southern German region Baden-Württemberg. Sunday, it was officially announced that the ancient walls are being slowly eroded by human urine. This isn’t just creating a big stink – quite literally – it’s actually eroding the walls, causing significant damage to the stone.

In response to the rebel relievers, the city has doubled the find from €50 to €100 for anyone caught urinating on the church. But that hasn’t done much to decrease the amount of occurrences. The custodians of the church itself say more needs to be done to protect this iconic figure.

The real question here is … why?

Why is this a common occurrence? According to Ulm Minister’s head mason Michael Hilbert, “I have observed it again for the last half year, and once more people are urinating and vomiting on it.” He continued, “I’m not the pee-police, but it’s about maintaining public order.”

Such events such as the wine festival and Christmas market are surely to blame in some part. These events attract many of the city’s residents as well as visitors to one central point centered on drinking, eating and being merry. There are typically public restrooms available for these activities, but they cost money and many times there is a line.

If you’ve ever visited Germany, or lived there as an expat, you’ll notice it isn’t very pee-friendly. In fact, I would go as far as to say that it is the UNFRIENDLIEST place to find a public toilet I’ve ever been. Restaurants say no, or ask you to pay and the presence of free public toilets is pretty much obsolete.

A church with a view

Despite the pee-problem, the church continues to be an important sight in the city. For those who dare to climb the 768 stone steps that narrowly wind up 141 meters to the top of the steeple, the views are spectacular. You can even see the Alps on a clear day.

Construction on the church began in 1377, but was not completed until 1890, over half a millennium later. The panorama from the top of the steeple, which involves a climb of 768 steps, offers views of the Alps on a clear day. In addition, while much of Germany was destroyed during World War II, the Ulm Minster managed to escape relatively untouched and thus the original steeple is still in place.

Today, there continues to be renovations and preservation work being done to keep the steeple intact, but it appears that there is a bit of a bigger problem threatening its foundation.